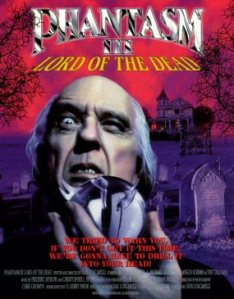 I’m not ashamed to say that this is my least favorite of the series. It’s hard to say if it’s the weakest entry or not, some people really hate the fourth entry, though I don’t know that that’s fair.

Phantasm three feels like it’s strays little bit too far from the formula… Ironic since that’s exactly what people say about the second movie! I may also be a little bit biased​. I discovered Phantasm three sitting on the shelf of my local video store about six months to a year after it had been released and I nearly lost my mind. I was so excited to finally see this – not knowing that it had even existed. After watching it, it felt like a let down. But you know what, it’s that era of film as well. A lot of the sequels from 1993 through 1998 also felt very disappointing and horror itself was in place I really didn’t like. 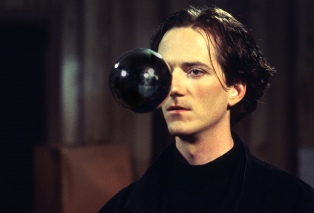 The good news is Michael Baldwin is back for about half of this film… The movie starts up strong picking up right where at the second one left off. Jody is back as well, although for a great deal of the film he takes the form of one of those silver spheres- One that is now on the side of good. I very much get the impression that there was some confusion or some doubt that Thornbury and Baldwin would make it back, or perhaps that they would make it back for as much of the film as they did. As a result, the second act introduces a lot of new characters and tries to form a whole new trio. We have another young boy who has been orphaned by the tall man’s shenanigans, as well as a militant young black woman who serves as the muscle. They’re both very 90s stereoypes, and in a lot of ways, Reggie banister doesn’t fit with them. He seemed out of place with his 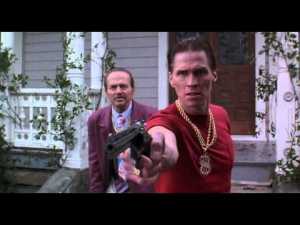 seventies/eighties look and sensibilities. It’s something you don’t notice  as much when he’s hanging with his contemporaries but it comes into sharp relief and when contrasted against these strong, modern stereotypes…
We also encounter some new villains – some bright and obnoxiously colored scavengers. They get promptly killed off and turned into zombies then keep returning to wreck the film… Honestly they’re one of the weakest parts of the movie. These characters are practically cartoons and they sap a lot of the creepy atmosphere from the film, pushing the humor over The line to silly shenanigans.

At the end of the day, I think that’s really my problem with this movie… It’s not dark enough, it’s not scary enough, it’s not brilliant. If you got rid of these silly scavengers, or made them less of a caricature and more a threat I think I would’ve liked to better. I mentioned before that the orphan character is just so… clean… He’s got freshly laundered jeans and a bright blue jean jacket, his hair is immaculately cut. If he were in rags with a dirty face I think I would’ve accepted him more. The world would’ve felt more grim. 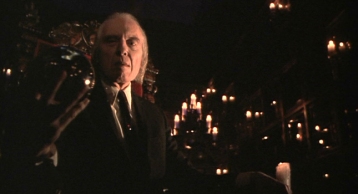 You can’t dismiss this film though, it’s got some great moments and some wonderful touches on it… We have some truly creepy images of the tall man sitting and communing with the silver sentinel spheres… Indeed we see more of the balls in this movie then possibly any other phantasm film, and with a greater variety. We don’t necessarily see them cause the same level of gore as we did in part 2, but that’s a budgetary restrictions…

All in all, this one is worth watching – if nothing else as a bridge between two and four… And of course for the same reasons that you watch any Phantasm movie… It’s a reunion with Mike and Bill and Reggie and Don and Angus, and you.