Long considered a classic, the thing about Death Race 2000 is that it’s the kind of movie that could only be made in the 70’s. And of course if you can remember the 70’s, you weren’t there. Well, I was there. But I was five as the seventies rolled into the 80’s so I don’t have the nostalgia for it that some do.

Still, there’s something about Corman in the Seventies that allows you to get away with David Carradine in a mask and cape, or Sylvester Stallone driving a car with a giant knife on the hood. Visually, this thing is a comic book. Yet it’s easy to see how the violence in this movie would have been a little out there for 70’s audiences. Today, in the era of Saw, 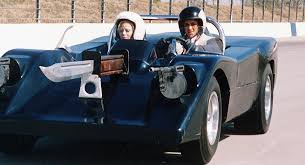 running down civilians and tossing a smidge of blood here and there is mild. In that era where transgressive cinema was really finding itself, senseless violence was a little more shocking.

In this story about a much hyped annual race between lethal contestants Carradine (the black cloaked champion dubbed “Frankenstien because he’s been put together so many times after too many wrecks) chews the scenery as he is want to do,  even as Stallone (in a role his agent probably should have run screaming to the hills from) grumps through the competition in a stylized 30’s gangster pimp suit. It’s not just  race to the finish, it’s a competition to murder your

opponents and as many innocent bystanders as possible in order to achieve a higher score.

The thing is I don’t hate it. I appreciate it on a classic film level and of course I revere Corman. But being raised on Splatter and being a fan of racing games like Carmegeddon (much the same premise, but with more wrecks and blood) this feels a little slow and tame for me. I’m glad to have seen it and I wouldn’t necessarily change the channel if it came up on TV one night.

Not until the commercials anyhow.

Death Race 2050 is a soft reboot that acts as a kind of sequel to the original Death Race and retreads the same plot more or less exactly. Of course, this film uses no name actors and brighter colors to achieve a hyper reality that directly conflicts with the supposed dire nature of the race.

When Death Race 2000 was made, it was ridiculous and campy, but to their credit, all  the actors played it straight. There were hams of course, but they never played it off as comedy or parody. The same can’t be said in DR2050. This film isn’t even trying. It’s unintentional parody of itself. There’s the occasional heavy handed

political message (It’s no longer the USA, it’s the United Corporation of America, with the “C” done up similar to a dollar sign) but it’s so cliche you can’t really even believe it’s earnest about it.

The cars themselves are quite cool to look at, but they don’t seem real. They feel like toys or models, a little too convoluted sci-fi – the sort of thing you’d find in “Total Recall” or “Demolition Man”. The featured ones don’t fit with the rest of this world. That dosen’t stop me from wanting a Hot Wheels of them  though….

I don’t want to call this film garbage, because I like garbage films. This sullies the good name of garbage. Rather I’d just call it a waste of time. if you’re new to the Death Race franchise, this film will put you right off it. If You’re a fan of the Death Race films, this movie will make you angry as Frankenstein in an ill-fitting mask. Either way, it ends up being just a waste of time.

According to IMDB: “Captions are written in Comic Sans “.

I think that nicely sums it up.

I was well into my thirties, pushing forty really, before I saw Death Race 2000. I have no idea what took so long either. Some films just fall behind the bookshelf – you know, the stuff you always mean to watch but never actually get around too? Death Race was like that for me.

Doing up my reviews, I realized something else. It may be a generational thing. I missed Death Race by at least half a decade. There were no commercials or advertising blitz for it to pique my interest, and it wasn’t one of the movies that constantly played on late night UHF like the 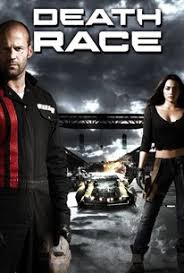 Death Wish films and the Eastwood westerns. I think it more went by unnoticed, never germinating the nostalgia in me that it might have if I were about five years older.

Still, I’m a Corman fan and I remember being vaguely aware of the Statham reboot, understanding that yes, they were indeed connected. Seems like it’s time to hit all of these at once, especially with #4 being released just a couple years ago.

So let’s kick off this years franchise focus with the Death Race films. Come along as we look at the good, the bad, and the REALLY bad.