Bob Hall wrote most of the run of my favorite Valiant title – that being Shadowman. When I met him at NEO Comic Con I was hoping for a Shadowman print to get signed. A Master Darque one was close enough!

First and foremost, can we talk about Phantom Stranger?

This book is driving me completely around the bend. I mean it. It’s crazy frustrating.  The whole secret Identity thing is just infuriating…oh you didn’t know about that? John Constantine sure does.

Yep. By day, loving suburban father. By night, dark avenging spirit of Judas. I just want to rip what’s left of my hair out. I’ve pointed out before that what is really intriguing (or used to be at least) was this sense of mystery about the Stranger. Dude, it’s BUILT INTO HIS NAME. But he’s anything but a Stranger anymore. Seriously, we know everything about him. He’s Judas, cursed to walk the earth and untill he does enough good to make the thirty pieces of silver around his neck vanish, so these days he’s

playing mystic superhero in the new 52 universe, complete with secret identity. Thank you DC for completely sucking everything cool (that is  to say –  the mystery and slight detachment from humanity) out of this character. It’s really a shame too, because you have great scenes in this book like this one below – 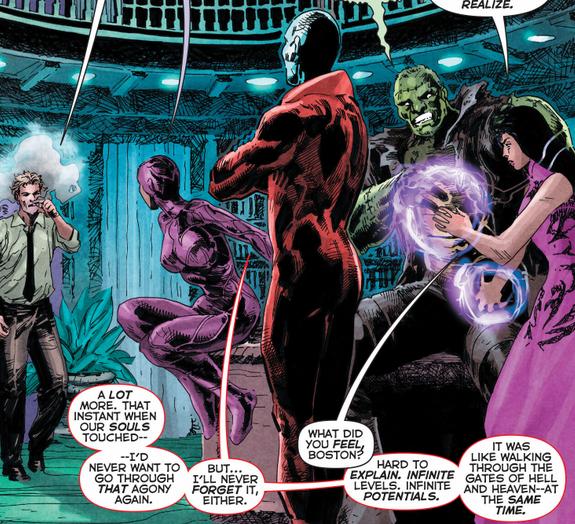 How cool would that have been if we DIDN’T actually know anything about the stranger? Sure, provide a writers bible so the writers know his origins, and can write this kind of stuff into the story, but don’t just lay it out spread eagle in front of the readers….ugh. This book frustrates me so much. Especially with stunning scenes like this: 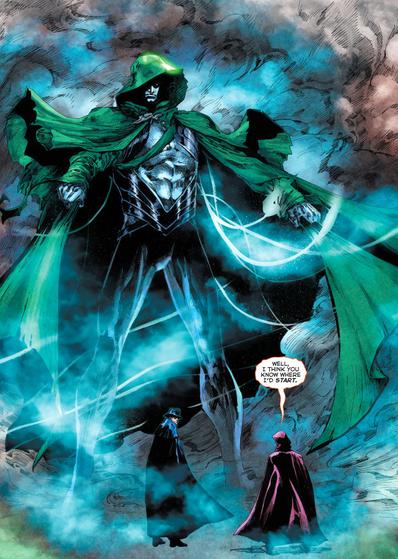 Superman is just as frustrating. I saw this cover and

thought  “I may have to get me some of that”. I’m not sure what I was hoping for., I was kind of thinking Metallo. Reading through,  they are calling the character “Triple X”. I’m not sure who that is ment to be…is he original to the new 52? Could he be a version of Doctor Double X (one of those characters you probably only know about if you read the Who’s Who comics religiously)? I was even wondering if he was supposed to be a different version of an old Superman villain called NRG X. I know he appeared in the modern age at least once, though I haven’t tracked that story down, but he’s significant to me because he’s in one of the firs

t Superman comics I can ever remember reading. I think I may still have a physical copy of this somewhere, I know I have a digital one.

Anyhow, even after reading the book I’m still confused. I can see they are tryign to do a myxtlplick story and I also see they are really trying to amp up his sinister. Don’t like it.

Tried something different this week. I found a book called Repossessed. It’s a kind of Fringe thing I guess. A team of officially sanctioned

exorcists, and hilarity ensues. It’s smartly written and entertaining. I get that kind of “John Dies at the End” or Fringe vibe off of it and I’m hooked. I’ll definitely be picking this up again next month. They have a website you might want to check out :

I really am digging it and hope the series stays as entertaining as the first chapter. 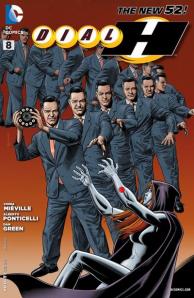 Speaking of entertaining, I’m still with Dial H. That kind of surprises me because can’t see this series go on indefinitely and I’m not really attached to any of the characters but it’s got me curious enough to keep reading. This issues dialed hero was hilarious by the way. “Flame War” who’s insults turn into fire. So he says that blouse makes you look fat, and you shirt catches on fire. Fun stuff. There’s some sort of black ops team stalking our dialers though, and I’m curious to see where that leads. I’ll probably grab it at least one more month….if I see it and remember to.

Shadowman is still impressing me. We’re only three issues in, but what I see in this title is t

hat it’s really trying to develop it’s own identity. It’s still grown on the back of the name’s goodwill, but it really is feeling more and more of it’s own series. There’s a LOT of the Akklaim influence with a heavier (and more traditional )voodoo storyline and a big sequence set in Deadside (something we never really saw in the Valiant version). The character is spookier than it used to be. I kind of miss the straightforward feel the Valiant one had, but the spooky one works too. Really loving the scythe. I thought I’d have to wait out the first six issues to really get a handle on this series and whether or not I like it. It’s connected with me really early and I really dig that. I’m so glad this title is back, right next to my Green Hornet, Lone Ranger and Shadow. I never figured I’d be an indy man (I expected to be a DC fan all my life. Thanks new 52).

Finally, there’s Youngblood. Youngblood has been consistently entertaining, and this stays with that. We get minimal character development (but it IS there) and a lot of pretty pictures and fun storytelling. The real Shaft is back, still in a FBI suit, and cooperating with the team (kind of) on the mystery of the murdered Vogues from different time periods.  I get the impression  that Terrel will come back as Shaft eventually and I’m a little disappointed about that I think. I really am liking “Not-Shaft” (as the team calls him). There’s a teaser in the back of this book that shows Terrel’s Shaft back in action along with Badrock. I suspect the next issue or two are going to be flashback to finally explain why Badrock has been in that coma on that hospital bed  since the series relaunched. I do hope to see Badrock back soon, but only if they write him correctly. He was always the most fun part of the team.

And with that, I’ve got to get back to Violent Blue comics. Head over to the site and check out today’s post!