The Demon Lover starts off just the way I like it, nice and spooky with the sleeping girl and a Satanic cultist casting a spell. I’m actually a fan of 70s occult horror so starting the movie off like this is right up my alley. It sets the tone even while it makes you wonder what is going on.

Funny, the cultist looks more than a little bit like David Mustane from Megadeth. We’ll find later that his name is Damian Kaluta  and he’s the cult leader.

I’m a little confused though as to why the victim is wandering around in the dark outside. My previous experience with Donald Jackson films makes me feel this might be a diversion, until A black and skeletal hand reaches out water from the blackness.

We cut back to the creepy basement where a bunch of hippies are enjoying banjo music and alcohol. While everybody relaxes on my grandfathers couch, Frank Zappa is downstairs doing the funky chicken, I kid you not.

The truth is, the cult leader, camping under a pyramid tent, seems to be the only one there taking things seriously. It’s an interesting snapshot of a cult culture in the 70s. The fact that the rest of the cult members are so flippant begins to really anger Kaluta who explodes in a rage.

“What a bummer, how are you going to have any fun if we don’t get drunk and do something scary?” That pretty much sums up most of the members, just there on the lark looking for kicks. He drives them away in frustration

Almost alone in his solitude, Damian Kaluta finds himself with one disciple, and begins the ritual by himself. He manages to conjure up a Demon. It’s a hairy demon, but I guess it WAS the 70s. In the morning the police, lead by Detective Tom Frazetta, find a dead body.

The spell begins to take hold as Damian uses his magic and his Demon to take revenge on his forsaken flock. The deaths attract the attention of Frazetta the local portly detective with a moustache. He visits various occult gatherings at Ted nugent’s house (no, really.) where he encounters former cult members and various mystics including a quick appearance by a VERY young Gunner Hanson. I’m less bothered out by the fact that he’s not wearing a flesh mask like leather face, not it’s the fact that his beard is so dark that it’s almost black. I’m so used to him and his snowy white beard that the dark hair is freaking me out. Detective Frazetta is unimpressed and he goes to interview Damian Kaluta to dig up some dirt, fruitlessly.

We cut to Kaluta in the middle of a dojo, training in martial arts. It’s one of the first touches I’ve actually seen that give some real indication that Jackson was involved. He was always interested in spirituality, but very little of his work dabbles in the occult…it offends his fundamentalist upbringing.  Eastern philosophy, though, martial arts and Bushido though always fascinated him and this seemingly random scene inserted in the middle of the film makes perfect sense considering Jackson’s predilections.

The kills, when they come are good and I actually like the design of the demon, hookey as it may be. But the film is poorly paced and the murders are too far apart. You can see it’s still early days for Donald Jackson. He is learning how to craft a narrative and is 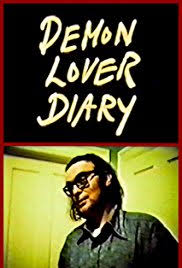 beginning to understand how to flow from one scene to the next, but hasn’t really learned script writing structure yet, and the sort of ramshackle production begins to show cracks at the seems (Particularly if you know any of the backstory on the perils of this production). “The Demon Lover” has a lot of the same clumsiness that we saw from West Craven in “Last House on the Left”, yet it also showcases much of the same promise for the director.

Nevertheless, I can imagine this being a perfectly acceptable bottom half of a double bill feature at the drive-ins of the 70s which is exactly where it ended up playing. It’s definitely worth a look, especially for fans of satanic horror. It becomes particularly interesting when paired up with the documentary about the production…but good luck finding either.