We’ve got a trifecta on this entry – a Box Set category, a Director’s Spotlight, AND a franchise focus!

I like Patrick Lussier, and I’m pleased to see Roy Schneider, Gary Tunicliffe and Rutger However, but that stupid Gothic font worries me. I know that Dimension shot a bunch of these in Romania back to back, along with a couple of Prophecy and Hellraiser films. On the other hand, I rather like a lot of the productions Dimension has done this way so let’s see what we’re in for. Jason Scott Lee is the lead in this film, and that’s not a bad thing either… He was excellent as Bruce Lee in Dragon, I remember really digging that as a teenager when I saw it in the theatre. He is also of course, the voice of David, Nani’s boyfriend in Lilo and stitch.

As I’ve mentioned before, Dracula 2000 is actually one of my all-time favorite vampire movies, but it was also one of those movies that I never thought should have been turned into a franchise. It stands alone really well and doesn’t lend itself all that well to further installments, however this isn’t a direct sequel anyhow. It’s more in the spirit and style of 2000, attaching itself as a sort of alternate universe sidequel film much the way Fulchi’s Zombie attaches to Dawn of the Dead as a sequel. Despite saying West Craven presents, Craven have nothing to do with this film.

We start off with vampire action in what looks like an abandoned subway and it’s good stuff – modern and slick and cool. They’re taking a cue from John Carpenters Vampires with cool vampire weapons and a militant priest. The fact that Lussier directed all three of these Dracula movies helps create a uniform feel. In addition to some modern sensibilities, he still manages to infuse the film with at least a touch of Christian

mysticism, possibly the reason our protagonist is a priest.

After despatching the two bloodsuckers he returns home for more support

Roy Scheider is just phoning in his role as the Cardinal of the order, but even that’s enough to elevate this film a bit. We get sweeping dramatic shots of the train heading to Bucharest and the now-defunct priest continuing his journey and his mission to rescue his beloved Julia and destroy the vampire plague. It’s an occupied country, and the soldiers and equipment create a tense atmosphere. They take full advantage of the Gothic and stone look of Romania in crafting their film – it’s an effective use of limited resources.

This film has an interesting origin for Dracula as well, establishing a terminology – they’re correct that the name Dracula is not a proper name but rather an honorific – and aspirational one to be one of the dragons, the priest tells us he’s had many names over the years and has existed for a long time under many guises – it’s actually a really well 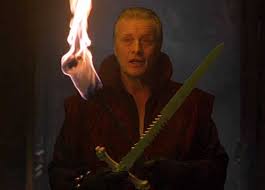 The further they get into the city, especially at night the more abandoned things get, unfortunately instead of coming off as creepy, it just shows the lack of budget. A handful of extras wandering around in the background may have actually helped (but they may have needed to save those for later scene in Dracula’s feeding pit). Nevertheless the blue fog and eerie lighting provides a perfectly creepy horror movie setting for them to kill vampires in.

Like John Carpenter’s Vampires, what we get here is basically a horror tinged action movie with some interesting looking bad guys. The stilts vampire has to be seen to be believed. It’s a film that I think is actually strong enough to stand on its own without the name Dracula, and I almost wish they had, but they needed the brand recognition and I’ll admit I probably wouldn’t have found it without that myself so I completely understand. Dracula 3 : Legacy is full of action, intrigue, infections and has a genuinely well thought out story. Much to my surprise, it’s one to recommend

A lot of Dave Parker’s early work is in documentaries or clip shows. Masters of Horror is one of those standards, a special with documentary like interviews strung together with movie clips and occasional host narration by Bruce Campbell. It’s pretty standard Halloween fare for the SyFy channel so why are we looking at it?

Masters of Horror solidify’s Parker’s love of film and of genre. It’s present in a lot of his work, s it makes absolute sense to do these kind of features on the very subject his passions are rooted in. You can see this in the way he approaches the interviews, first pulling out the standard stories everyone’s heard at every horror convention. But then

delving just a touch deeper, grabbing something fresher, not as well known.

Wes Craven is a great example, first giving  the traditional story about how Freddy Kruger was based on a childhood memory of a tramp on the street staring hu at him through the window. But then they move on to a story from Serpent and the Rainbow (Possibly Craven’s finest work actually, and a highly underrated film) where one of the cameramen mentioned to a voodoo priest that he’d like to be indoctrinated into Voodoo.

“Oh you will be,” the priest replied.

Within days the cameraman was a changed person and Craven reflected that on the day before shooting, the guy knocked on his door to quit and head back to the states. As

Craven tells the story, Parker juxtaposes his narrative with unrelated scenes from Serpent  and the Rainbow, matching it up perfectly, to the point that when Craven talks about him pounding on the door, we have a shot of Bill Pullman doing just that….before the camera rotates and reveals he’s in a coffin.

This video of full of flair like that, and a great illustration of Parker’s film chops, both as an editor and as someone convincing the presentation. It’s a good indicator of where he will go on later in his feature work.

From IMDB : “A psychology student finds all her childhood fears and phobias becoming real after a traumatic event. ”

They was one of the reasons I picked up this box set in the first place. It seems like a good opportunity to consolidate my DVD collection a bit. I have seen this film before, it’s probably one of the biggest profile releases on this set! Still, I understand why it was collected here. They has gotten a lot of flak over the years, people seem to really, really hate this film – and I don’t understand why. Is it the “Wes Craven presents” conceit? A backlash or a disappointment that it’s not up to the quality of other Craven films? Objectively speaking, let’s face it – Craven’s involvement in this film was probably limited to cashing a check.

It’s a strong story to me, I remember the commercials being intriguing but I simply never made it out to the theatre in time. Sitting at home watching it on my television, the film scared me. It genuinely frightened me.  It immediately sets the tone for this film and the kind of things that were going to start seeing here. It’s got the look and feel of a lot of films from this era, things like Jeepers Creepers and Darkness Falls. The fact that they never really show you the monster is brilliant – you see enough of it to know that there is something there, something exists in that space and is stalking you but man, the fact that we never get a good full-fledged reveal makes it far creepier than anything – whatever these things are just thoroughly creeps me out.

Of the films in this volume, this may well be the scariest and if I wern’t reviewing it for this column, it would almost certainly be a “in defence of “. I love this movie and if you haven’t caught They, it’s really worth a second look. It’s one that seems to have gathered more appreciation of a time, although it’ll never be a classic it certainly deserves to be more than just a footnote in an eight pack of horror movies.