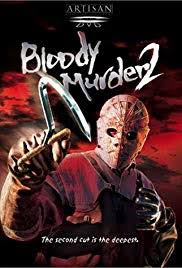 There’s pros and cons to Bloody Murder 2… Pro, Tiffany Shepis is in this… Con The mask is different, and is in fact pretty uninspired compared to the hockey mask of the previous installment. It’s just one of those plain white face masks you see at the craft store – and it’s not even the one they feature on the cover of the videotape!

We open to what is pretty obviously a dream sequence, a young blonde woman in a misty woods – I’m pleased to see that they’ve retained that same look from the last film, at least this carries over. It’s the sister of Jason, the final victim from the previous film and she is dreaming of bringing her brother back. It’s a good enough set up and it brings us back to the camp. This time however, they aren’t getting ready to open the camp, but rather they’re closing Camp Placid Pines up for the winter. We don’t get a proper opening kill on this one – the dream doesn’t count – but they do mention a wood chipper… That’s Checkovs gun if I ever saw one!

This time, it’s Tiffany Shepis who suggests the game of bloody murder as the campers set around the bonfire. We get a little bit more of the lore concerning Trevor Moorehouse. It’s a good thing because he was woefully under developed in the previous film. Back in the woods, we get the same fake outs from the previous film – a camper with ketchup and another one in a fake plastic hockey mask.

Still, I can’t complain because it does lead to the first kill – and I gotta give these guys props… It’s a lot more graphic than what we saw before. At its heart, Bloody Murder couldn’t decide if it was a slasher or a mystery, but Bloody Murder 2 goes straight for the gore and does so before we even hit the 18 minute mark. They need to go hard on the scene as well, because it’s the films set piece. They’re still creative kills and blood splattered throughout the film, but none as flesh rippingly intense as this one. Best to go in knowing what to expect. 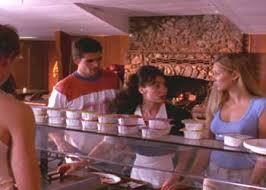 The next morning, we are still following the structure set down by the first movie – that first kill isn’t missed because they believe he’s left the camp for the year. In the meantime, the local cook gives us an idea of just how pervasive the Trevor Moorehouse urban legend is around these parts. It gives us a better feel for it and makes it more real than what we had seen previously. They mix it with some of the Meta dialogue that scream had made so popular – a discussion of who gets killed first in horror movies, the black dude or the women, then top it off with a little nookie so we can be reassured about who is going to die next.

After the next kill, the skeptical sheriff shows up to address ingenue Tracy’s concerns that she saw Trevor Moorehouse. It doesn’t matter, with the body count piling up, she is increasingly suspicious and decides to take the remaining campers to go search the campsite. Tiffany by the way, isn’t having it and storms off. It’s early in her career though which means this is just a good excuse to get her naked.

The rest of the campers searching the campus don’t find anything, but Tiffany certainly does – a desiccated corpse with an arrow through its neck lies on her path and her screams bring down the cast. At least it’s enough to convince the sheriff there’s a killer amongst us.

While the sheriff searches, it’s time to hit the showers to clean off some of the blood, right? Of course, as we all know, the shower scene is like a dog whistle for a slasher and our killer shows right up, hiding in in a new stall to lure his victim out. There’s a clever twist here, and for all of my complaining about them changing from the hockey mask, the blood splatter really does look good on this plain white face – especially under the high contrast of the overhead fluorescent lights. Needless to say, the cops are not pleased.

The plot thickens when our ingenue discovers a video camera pointed at the dorms, potentially revealing the identity of the killer! This leads to the rest of one of the campers, and yet, surprise! The killer is still out there! (after all, we still have about a half hour left) meanwhile, it’s time for another spooky dream sequence.

The head counselor admits that the camp is over and offered to send the girls home, but they’ve got just a little bit more investigation to do – checking pagers, figuring alibis, and getting murdered in the woods. There is still more twists before the killer is revealed as

the third act ramps up.

It’s curious, the first time I watched this movie years ago, my initial thought was how much it was like an early Friday the 13th film… Now I’m struck by just how much this movie is like the first bloody murder film. They both have very similar structures, very similar beats – they’re not just checking off elements of the slasher film this time, they’re also checking off beats from the first movie, down to the final surprise appearance by Trevor Moorehouse. There is also a sort of backhanded attempt to create continuity – rejiggering the timeline and connecting the ingenue to Bloody Murder’s final victim.  It’s a blatant attempt to wedge this in line with the previous film – I’m not complaining, but it’s obvious that The continuity was invented after the bag rather than being planned out from the first film, and I’ve got to say it would be a lot more convincing if they were using the same mask in both movies. The radical changes a bit jarring. Still its interesting to see how they work it and it practically guarantee is that if you like the first one, you’ll like the second one, but there’s not much going on here that’s new or that pushes the franchise forward any. Bloody Murder 2 is a good, solid slasher that you can enjoy as part of the series or on its own.

This entry was posted on June 8, 2021 by mathias42. It was filed under Bloody Murder, Franchise Focus, Horror Movies, Uncategorized and was tagged with Bloody Murder, Bloody Murder 2, Tiffany Shepis.