It’s mostly comics this week, but I wanted to mention a couple of TV picks first as well!

After a highly accessible episode of Star Trek : Prodigy last week, we’re going into full on continuity mode. In fact, it’s really the one we’ve been waiting for… Where Dall meets the

real Captain Janeway… And of course messes it all up. The scallywag from the doomed star base they visited a couple episodes ago is still slandering them in an attempt to make himself look good, the crew of the Protostar he’s having a hard time connecting with Starfleet. It’s only made harder by the fact that they are ship has a weapon inside it just waiting to infect any other ship or Starfleet entity they come in to contact with. As much as I enjoy the standalone episodes, I have to admit, the payoff we’re getting here has been really good. This episode feels a little bit more Star Wars than Star Trek though, taking place at a remote outpost that feels like a frozen Mos Eisley. Still, they make it work, and leave us on a cliffhanger that just has me squirming in my seat waiting for more.

Stargirl too. Stargirl has at this point, gone full on soap opera continuity. Basically, the show is going to be in accessible to anyone newly discovering it, but then again, I supposed they can afford to be, considering they’re not getting a fourth season.

That’s what makes it so unusual to me that DC would pick this time to launch a new Stargirl miniseries. Stargirl : The Lost Children teams her up with Red Arrow, in a relationship that feels very much like her friendship with Yolanda on the Stargirl TV show. Together they’re out to investigate the disappearance of all of the kids sidekicks from the DCU. Not the current ones, but rather the classic ones… Truth be told I don’t recognize a lot of these guys. Airwave, definitely. But a lot of these are more obscure ones that I’ve only ever heard whispered of long ago in legends. Still, the amount of goodwill that the television series has built with me, it’s got me jumping into this to see where they go. Legacy characters have always been a thing for me, and mixing it with a hero that I’ve recently come to know and love is a great way of doing this.

Really, it feels like it’s teen sidekicks all around. this month.

I somehow missed issue eight of Worlds Finest, so I grabbed that and issue nine together. We still have that kind of kryptonian refugee from another world or dimension and their integrating him into the teen titans. I have to admit, I’ve never been a fan of the Titans, so this is a bit of a low point for me… On the other hand, it’s just nice to spend time here in a DC universe that I know and recognize, as opposed to what the DCU has become in the last five or six years. That’s probably worlds finest greatest strength. Pure superhero stories in a setting in style and at legacy readers. It’s 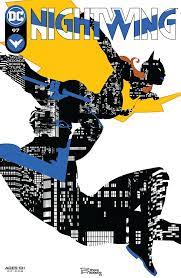 why I’m still gonna be reading this thing even when they’re featuring characters like the Titans that I just don’t care about.

Speaking of characters I don’t care about, you can pretty much skip She-Hulk this month. It’s featuring a side quest… Setting up supporting characters or villains or something along those lines… But Jen really doesn’t show up, and this issue isn’t actually about her. I have to be honest. I didn’t buy this one. I was going to, but it’s just not worth it to me this month.

On the other hand, Nightwing just continues to be stellar. I was an issue behind on that one as well, so it’s a back to back read. That’s not necessarily a bad thing. Issue 97 is kind of some loose ends with a good straightforward adventure, and one of the great bits of banter that I’ve really been enjoying between dick and Barbara regarding this month’s villainous psycho whos carving out vital organs from his victims.

You may or may not know that I am a fan of bat mite. I mean, The characters in general always appeal to me. Spider ham is another one on that list (no curiously enough, Mr. missile pic isn’t. I always found him frustrating and annoying rather than fun) well it seems like Batman’s not the only one out there in the DC universe who can attract a fifth dimensional imp… And issue 98 introduces us to Nite-Mite.

It’s not all over the top goofiness, but just enough of it, and Nite-Mite is illustrated with just enough cartoonish joy to make him fun but not to push him over the top into irritating. It’s well balanced and well handled, and I love it. I don’t want to see it every issue, but this was a wonderful surprise, and one of the reasons why I still feel like Nightwing has got his groove back. We’re back to the heights of the Chuck Dixon run back in the 90s. It’s just that good. Honestly, they should just bite the bullet and rebrand this as Nightwing and Batgirl… Because it’s just the perfect team the way it’s being written right now.

I Hate Fairyland is back and I have mixed feelings about it. See, the thing is I really enjoyed I Hate Fairyland during its original run. There’s something about that juxtaposition of the hyper violent angry a little girl hacking and slashing her way through a fairy tale universe. It was great fun. But if you want a return to I Hate Fairyland it has to get us back to basics. It has to reestablish the character… And as such we we see what happened to poor Gert after she returned to the real world. It’s not just that she can’t adjust, I don’t think she ever was meant for this world in the first place. She’s a drunken slacker loser. That kind of breaks my heart. Somebody once said that if you really love the characters and survivors of a horror movie, the last thing you want is for a sequel to come out… Because much worse is coming their way if they have to return. I almost feel like That applies to I Hate Fairyland. I liked seeing the psycho little girl, but it feels different watching that grown-up version of her stumble through adult life. Maybe it’ll be better once we get into the thick of the series. I hope so, because this first issue re-introduction was just a downer.

New Star Trek this month too. I guess Star Trek Resurgence is based on a game? I know nothing about this. But it’s taking place in the TNG movie time period, and that’s a definite plus for me. It’s life on a starship outside of the Enterprise… And that’s actually also something I enjoy. An unknown unique ship, a peek into the workings of a crew that we don’t normally see, I’ve always dug that. It’s nicely illustrated and it’s actually got me feeling a lot more goodwill to it than I did with the new Star Trek ongoing featuring Sisko and Paris and Scotty and what not. I almost feel like this may be the Star Trek series to follow… Will definitely find out. But I’m glad that IDW comics are leaning into the license. I’m especially glad that we’re getting stuff outside of the Bad Robot “prime” timeline, the Abrams “Kelvin” timeline, and instead getting back in that separate original Paramount universe. More of that please

I’m still behind on Iron Man and ghost rider I think. By the time I can get into that part of the stack, they’ll probably be a new Spider-Man out too… All stuff I can talk about next week. But before I go I’d be remiss if I didn’t point out the Gambit miniseries that’s already in its fifth issue. How did I not know about this? I suppose probably because most of the X books are dreck, and a shadow of their former glory. But this is good. This is really fun. The premise is that after a recent encounter with the villians Nanny and Orphan Maker, storm was de-aged back to childhood. That messes with both her

power… and her memory. Remy rescues her from the Shadow King and they head off on their own adventures. See the thing is, the storm was a thief when she was a kid, back in Cairo. It’s something that she has in common with Gambit, making him an ideal mentor for her. Marvel is describing this as an untold chapter in Gambits life, which means I have NO idea when this is set and that’s cool with me. Because what we get is a really rollicking adventure with gambit and little storm… And the chemistry between the two is just amazing. I’m a little late to this game, so I’m hoping to get this collected in trade, but either way, it’s definitely worth your time and attention. Go check this out.