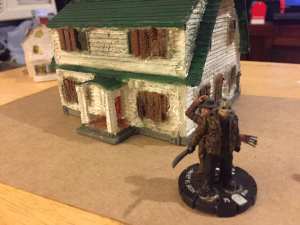 A week or two ago I was working on printing out the house from Nightmare on Elm Street. I found a model on Thingverse called “the puritan” that was really close, so I downloaded it to make some alterations. That’s when I realized the house was actually in pieces, like a model… there were over a dozen STL files. After altering the front so then I had the windows I needed, and extending the porch awning a little, I virtually assembled all the pieces in Microsoft 3D Builder. I’ve been dabbling in Builder here and there, mostly using it as a print engine rather than a design space because it’s so limited. However, when somebody suggested I should do the Evil Dead cabin next it got me thinking about the way I had assembled the Elm Street house.

Typically I use Bryce 7 to do basic 3D modeling. It’s good for organics and basic things, like the nerds candy mascot or a simple spaceship, and is really good for rendering with the way that it puts mapped textures on the models. However creating an object like a cabin, with the physical textures of the slats in the shingles on the roof would be incredibly difficult. Each tile, each board would have to be created individually and there’s no way to shortcut that in Bryce. There might be a way though, in 3D Builder!

While I can’t create complex shapes or use Boolean objects in 3D Builder, it does have a feature that’s incredibly useful. You can transfer two dimensional objects into three dimensional ones. That doesn’t mean that you can put in a photo of something and it’ll create a model of that, but if you take a black and white image, say something like a flag where you change the red stripes and the blue field to black and left the white parts white, 3-D builder will read the two different colors, and import the white elements, and give them some mass. It’ll treat the black elements is negative space and leave those flat. If you look up on Thingverse you’ll see a number of lithopanes done in this manner. I thought, “well what if I apply this to making the cabin?” I started off with a base, the walls have to be about the same size. On that base I drew stripes where the slats would be, and then added two squares for the windows, and one additional one for the door. I also added two black squares beside each window where the shutters would be. After creating the main part, I added a flat base for it to lay on, then created one more picture… The door frame and the details on the shutters (represented in green for the illustration) . I imported these three images into 3D Builder, then layered them one on top of another, each creating just a little extra upraised detail on top of the previous one. Once those three layers were created, I merged them into one object. This gave me my complete wall with wooden slats, and upraised frames and shutters. I repeated this process three times, creating each wall in the shape and detail that I wanted. Once I had all four objects created, I was able to assemble them, much the same way I assembled the Elm Street house. 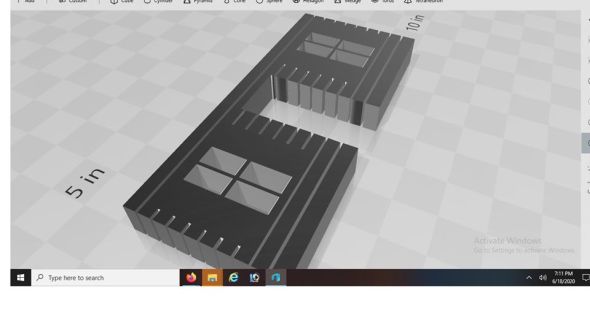 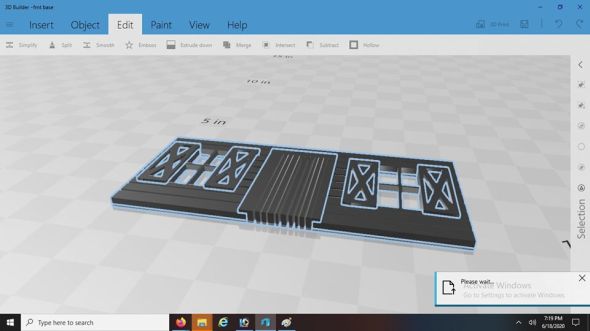 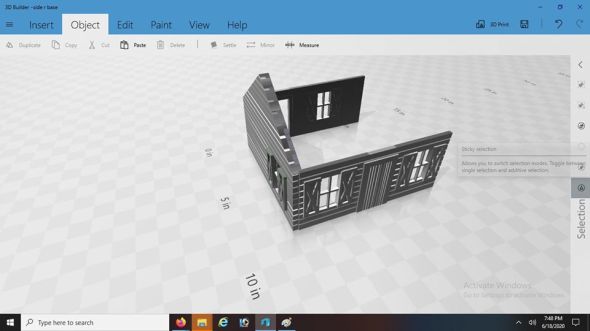 That just left the roof. 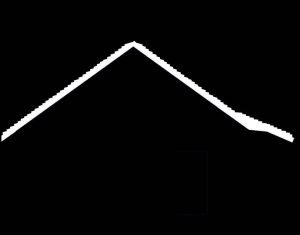 Instead of creating individual shingles, the way I would’ve had to in Bryce, I instead drew a profile of the roof. It’s basically a big arrow, with jagged edges going up and down I drew this shape three times, altering the edges each time so that if you were lay those three images on top of each other, you would see some of those edges poke out from underneath each layer. That’s not too far from what I was planning to do in the first place here. I imported each of these images in the 3D Builder, and gave them a little bit of width, then stacked them on top of each other, creating a small portion of roof. I merged, copied, and then pasted. Now I have six sections of roof. I merged again, copied and paste it. Now I have 12 sections. I kept doing this until I had enough length to cover the top of the cabin, and ended up with a nice, rickety looking shingled roof that was uneven and detailed, perfect for what I’m trying to create. 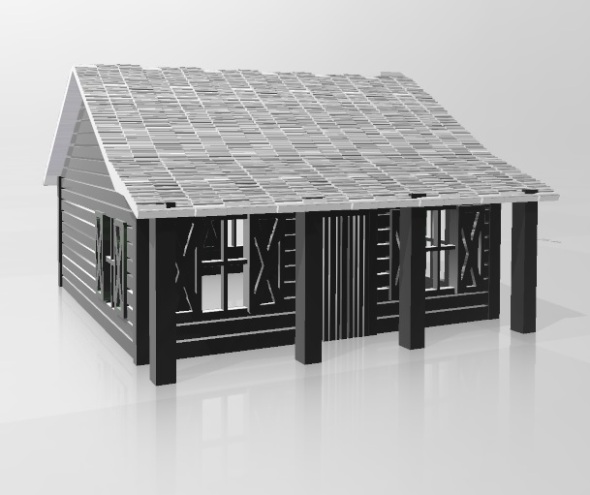 There’s a few extra touches, adding the floor of the porch, and the four wooden supports in front of the cabin, adding the chimney and even the electric meter for kicks. But all the work this time around was done in 3-D builder. I ended up printing it out without any supports, just for the heck of it… I figured I’d have to go back and try and do the roof separately, but the way these shingles were designed, it actually ended up supporting itself, doing each tile individually, which gave it enough time to cool and set in place. 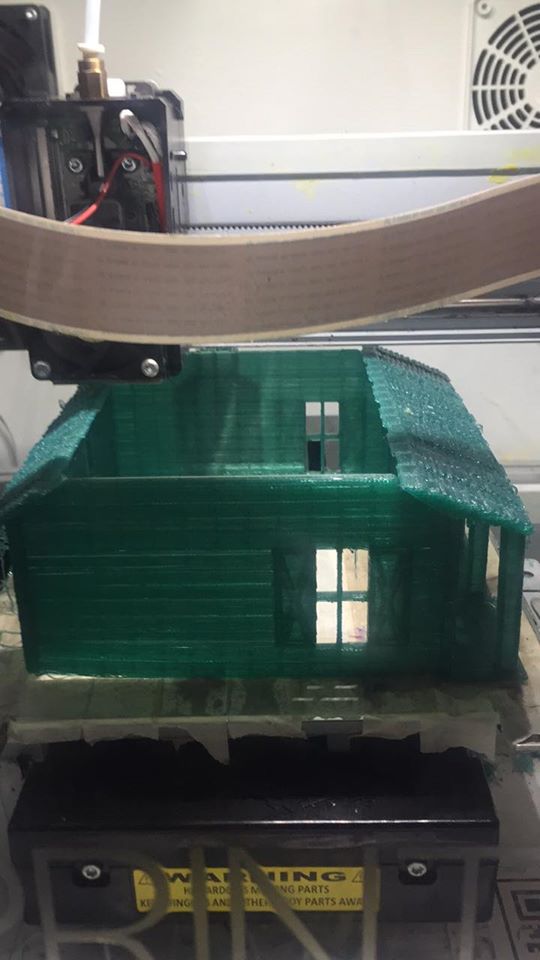 The end result is one of the 3-D builds I’m most proud of. Not just because of how nicely it came out, but because it’s something new, something different, done in a completely different program in format than what I’ve done before. 3D Builder is not replacing Bryce anytime soon, I still need to be able to do organic shapes and more complex objects then 3D Builder can handle, but I can definitely see myself leaning more and more into this app. It’s great to have another tool in my repertoire. 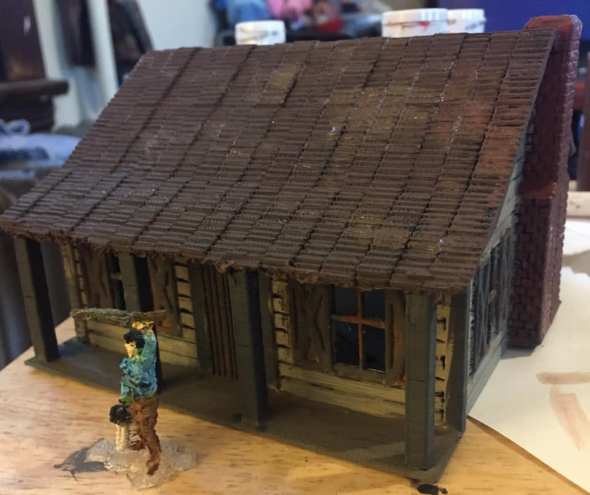 This entry was posted on June 29, 2020 by mathias42. It was filed under 3d printing, Horror, Uncategorized and was tagged with 3d Builder, 3d printing, Bruce Campbell, Evil Dead.